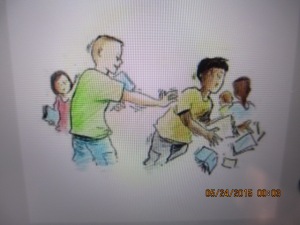 Who is most likely to be a victim of a bully? These poor victims that have been depicted in the photos above have characteristics such as physical weakness and are easily distraught emotionally. They may also have physical characteristics that make them easier targets for bullies such as being overweight or having some type of physical deformity.Boys are more likely to be victims of physical bullying while girls are more likely to be socially bullied.In general, these victims do not have nor have been taught social problem solving skills.

Victims of bullies may come home with unexplained injuries or with damaged or missing clothing or possessions and do not reveal these assaults with their family. They exhibit changes in eating habits, make excuses not to go to school, acts out of character and has fewer friends. Sleeping difficulties are evident and, in essence, the nervous system of these victims is on overdrive. Anxiety can also be evident and keeps these children up at night or cause frequent nightmares.

According to bullying statistics of 2014, the following data is provided;

Over 3.2 million students are effected by bullying each year.

1 in 4 teachers see nothing wrong with bullying and will intervene only 4% of the time.

17% of child victims report bullying 2 to 3 times a month.

71% of students report incidents of bullying as a problem in their schools.

Girls bully in groups more than boys do.

There is significant research which indicates that either adult or child victims of bullying are at risk of stress related illness which can possibly lead to suicide. Those who have been the targets of bullying can suffer from long term emotional and behavioral problems. Bullying can cause loneliness, depression, anxiety and lead to low self esteem and increased susceptibility to illness.

Even though there is evidence that bullying increases the risk of suicide, bullying alone does not cause suicide. Depression is one of the main reasons why children who are bullied commit suicide. Lack of support from family and friends can be factors in depression and suicide. Hence, a major factor in the prevention of depression and potential suicide is the love, support and acute awareness of any changes in the victim by parents and friends as well as teachers.

Looking at the tortured faces of a victim of a bully as noted above, does demonstrate the intense pain that they are experiencing and no child or adult should be allowed to suffer in such a way when it can be prevented.

My next post will discuss cyber bullying and what defines this behavior and how to prevent this dysfunctional behavior which impacts children as well as adults.

Please do let us hear your voice and what your are feeling about this topic of bullying.

As a psychologist and marriage and family therapist, I have been inspired to share numerous blogs about the challenging issues in both my life , undisclosed patients and others. As an author, my first book was a "fictional/autobiography, FAMILY SECRETS: A JOURNEY OF GOOD AND EVIL. I do invite all to enjoy my blogs on multiple topics and my novel and children's books which can be found on my website, franwhiteauthor.com View all posts by familysecrets123